Last week, Dev Bhatia announced his retirement after a long and distinguished career with Brewer Smith Brewer Group (BSBG). He has been working with the company for an astonishing 33 years, and BSBG Managing Partner Alistair McMillan said: “Dev is part of the fabric of the company, and will be sorely missed by all at BSBG. His dedication and the positive energy he brings will never be forgotten. We all wish Dev the best in his well-earned retirement.” To honour the man who is so hugely loved, respected and valued by all staff across the group, and to give Dev the opportunity to reflect on a career that began back in the 1950’s, we sat together to look back on old times and also to look to ahead to the next adventure… What follows are the thoughts of Dev - BSBG Employee Number 1…

“It’s an emotional time when one takes retirement, but as I move into this new chapter of my life, I can’t help but take some time to reflect on my long career with Brewer Smith Brewer Group, and all the wonderful people I’ve become friends with and the amazing experiences I have had along the way.

“Retirement is inevitable, but it’s a challenge to adjust when it finally comes around. Already there is the feeling that something is missing! So used am I to waking up earIy in the morning and going to work with my colleagues. Everyone at BSBG is like family to me, and that’s a big thing to miss, so now I just try to keep myself busy with my children, grandchildren, my sister, just to make sure I’m always around those dearest to me. I’m also watching the Cricket World Cup of course, and hoping for an India win.

“I joined BSBG back in December 1985. I remember I’d been working for another company in Dubai for the previous 10 years, but when I started with BSBG, immediately there was the sense that this was a very good company. We were doing projects even then that were far more prestigious and larger in scale than any of those I’d come across or worked on previously, and there was a great camaraderie between all the staff (although there was probably only 15 of us at that time!)." 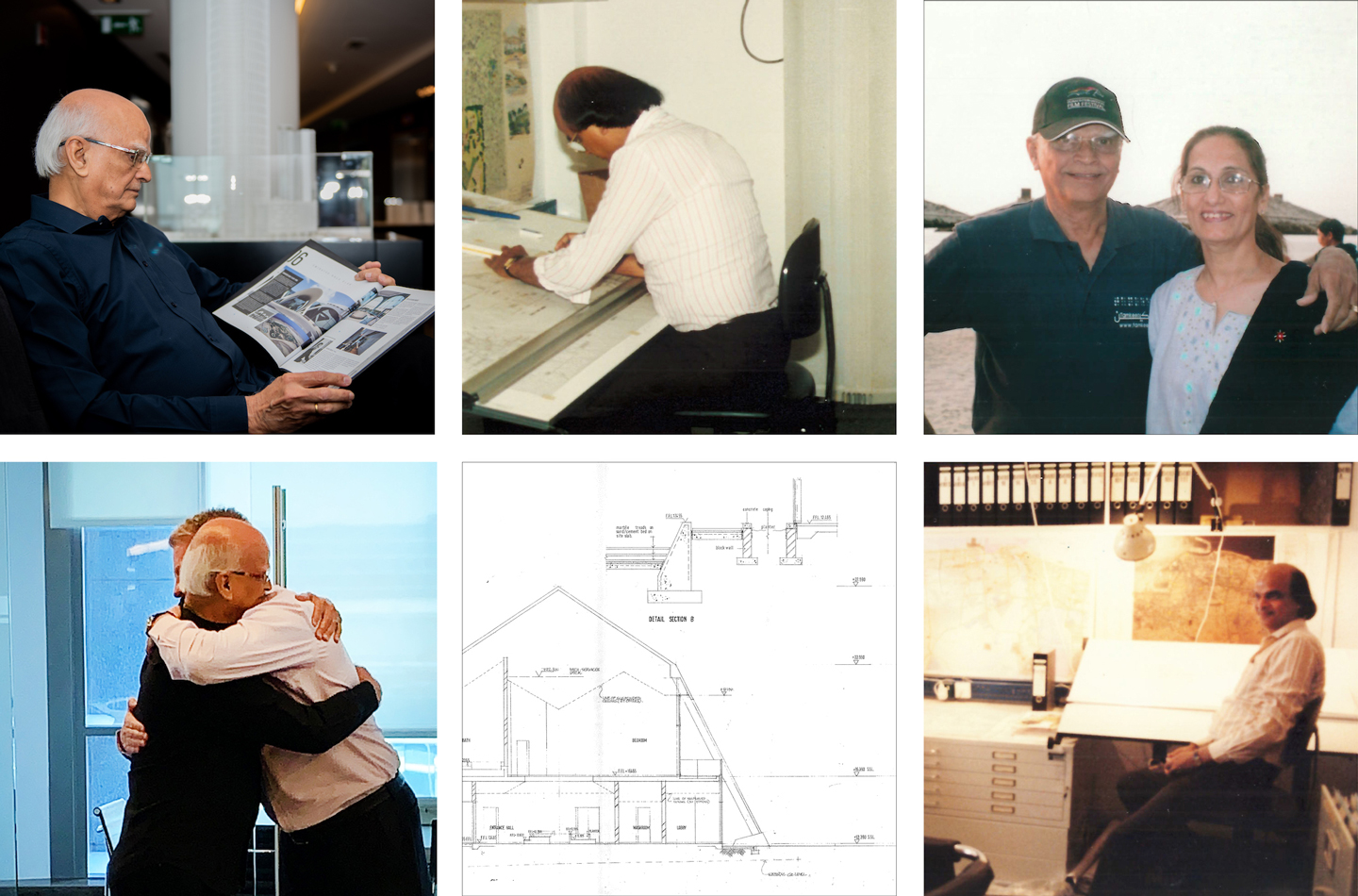 (From top left) Dev revisits the Emirates Golf Club project in the BSBG 40th Anniversary Book; Hard at work in the eighties; Dev with wife, Lata, at a BSBG function in early 2000s; Dev and Managing Partner Alistair McMillan at Dev's retirement

“The main thing I found, which has remained a constant throughout the whole of my time with the company, is that I was constantly learning every day. I remember the day Alistair McMillan came in to the business. Looking back now you can see how quickly he made an impact and how much we have grown as a business. We were already very busy doing so much work. I was working on the Emirates Golf Club, the Sheikh’s Black Palace and the Emirates Training College at that time, but it seemed like the projects almost instantly became of a far larger scale once Alistair came in. I think we’ve made a valuable contribution to Dubai’s development, and I’m sure that will continue under his leadership. I’ve always found Alistair to be a very nice, polite and sincere man. If any problems come, he always has an open door. That is a wonderful quality to have as a leader.

“A lot of people have asked how I’ve stayed just with one company for such a long time. It’s my thinking that rather than being a rolling stone, jumping from one company to the next, for me it makes more sense to remain where you’re comfortable, where you’re respected and valued. It’s certainly not always about money. Money is not everything. Necessary? Yes. But in my view where you get respect and you’re comfortable and the people understand you, that’s much more important. If one is pursuing great wealth, perhaps they shouldn’t be an architect! But wealth to me is being able to go home and be with my family. And in life that's one of the most important things, as well as being at peace, getting a good night’s sleep; these things have more value than money.

"Now this chapter is over, I’m looking forward to travelling a lot more and seeing different parts of the world; something I have always loved to do."

“I came to Dubai in 1967, 52 years ago. My brother-in-law had come here and he called me one day to ask if I’d like to come. He told me here you have to work very hard, and there wasn’t much here at that time. Mainly it was just desert. I came over by ship, as planes were rare and very expensive. It took about five days to get here, and it was quite a shock when I arrived to find sand as far as the eye could see! Walking to work I would often be ankle deep in sand. It’s been fascinating to watch how much the city has developed since that time.

“My earliest memories of BSBG are from when I first joined in 1985. We were working from an apartment on the seventh floor of a small tower block at that time. Very few staff, but they were all nice, good people. I thought at that moment that BSBG was the right place for me to be. But now this chapter is over, I’m looking forward to travelling a lot more and seeing different parts of the world; something I have always loved to do.

“When I left I didn’t want to cause a fuss, I didn’t want to disturb anyone, but it was wonderful to be given such a lovely send off by everyone. Being here for so many years, growing together, irrespective of nationality, cultural differences, we are like a family. Everybody was so kind to me when I finally finished and I wish everyone to have continued success with BSBG long into the future. I love and will miss each and every one of you all.”