With news that The Royal Grammar School Guildford Dubai is set to open and start accepting pupils from September 2021, Brewer Smith Brewer Group (BSBG) is pleased to announce our role in the delivery of this prestigious education project. The Royal Grammar School Guildford Dubai becomes the latest in a line of distinguished schools to take its place in the BSBG portfolio, alongside facilities such as Repton School Abu Dhabi, Foremarke School, Jumeirah English Speaking School (JESS) and Dubai College. 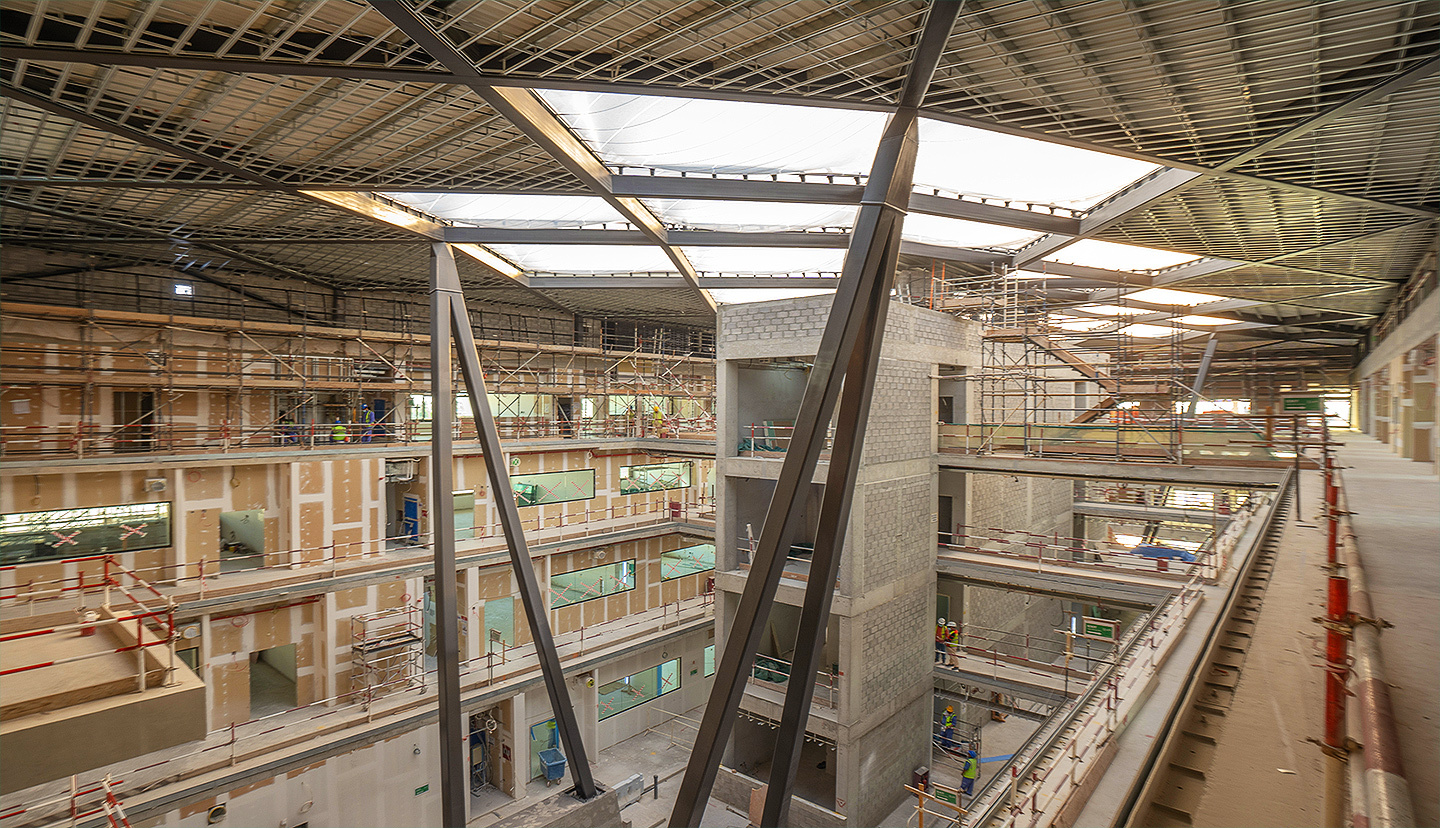 The coed, British Curriculum School will take pupils from Nursery right through to year 12. The Royal Grammar School Guildford is an important British education facility with a history that spans 500 years. The school has crafted a reputation in the UK as a bastion of academic excellence with an innovative approach to education, and the Dubai edition of the school has been built to further enhance that reputation.

The initial concept was completed by Bogle Architects in London, with BSBG engaged by long time project collaborators Multiplex under a Design & Build contract to oversee elements of the Schematic Design phase and take the project through Detailed Design and onto site.

Associate Director Demetrios Tourtouras is the Project Lead for BSBG. “We were brought in by Multiplex as the natural choice for a school of this kind of prestige,” Demetrios says. “We worked with Multiplex on successfully delivering Foremarke School and it was the same successful approach that was taken for this school." 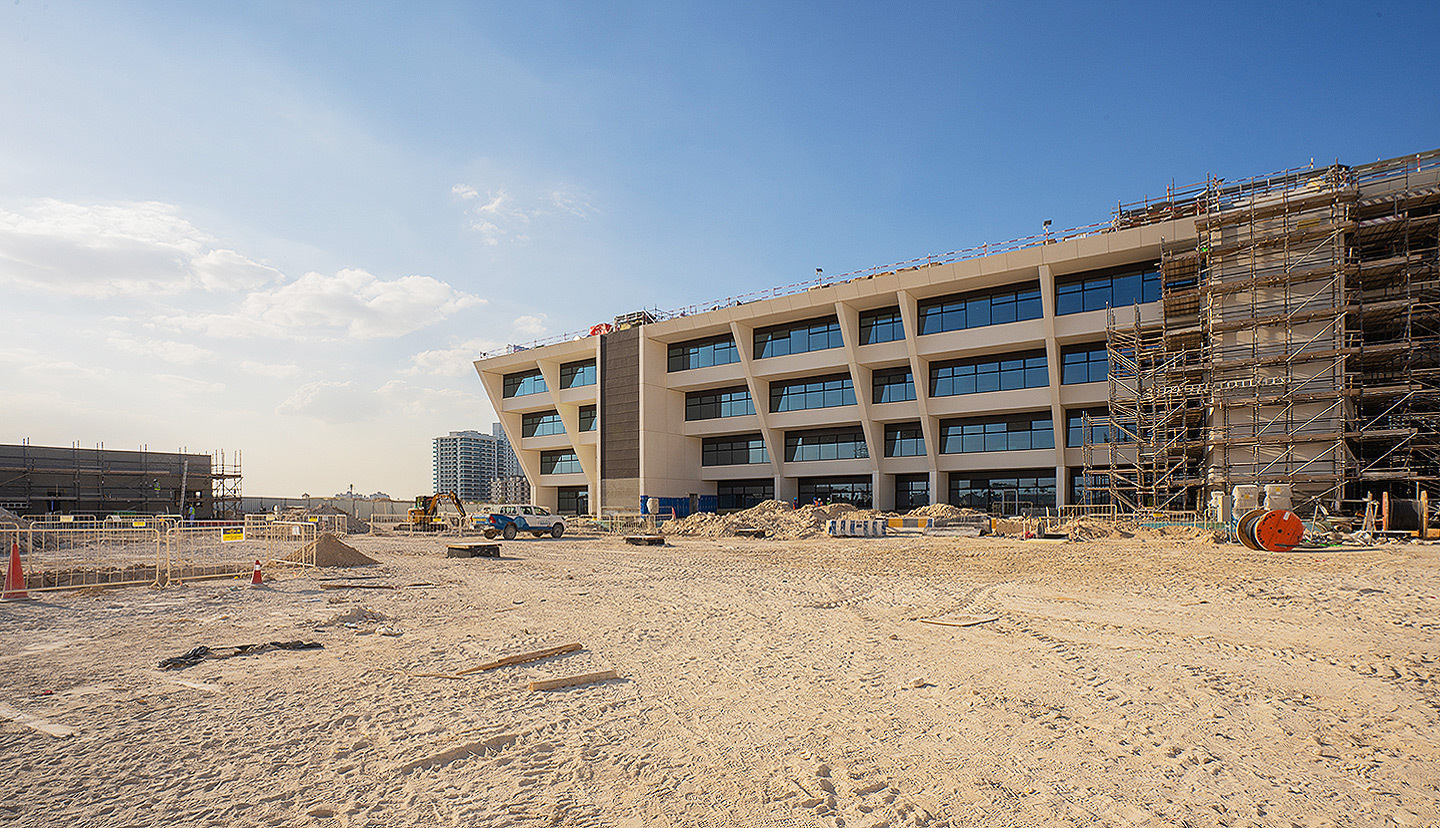 For BSBG, the project involved overseeing design development and managing the sub-consultants, while also playing a key role in a value engineering exercise to bring the project within budget, before delivering the detailed design and construction documentation, seeking authority approvals and later providing construction supervision as the project moved on site.

“In terms of challenges, we had a school site that was relocated within a developing masterplan, requiring careful navigation with authorities,” Demetrios explains. “But we managed to fast-track the necessary approvals to enable Multiplex to get on site as soon as possible. We were also able to deliver the construction and trade packages in advance for procurement and approvals to further aid the speed at which construction could begin and trade packages procured. The result of this approach meant that the site was activated early on, and the project is tracking very well against the delivery programme.”

The design of the school is most notable for the incorporation of an ETFE (Ethylene tetrafluoroethylene) roof, similar to those seen at the Eden Project in the UK, the Allianz Arena in Munich, Germany, and the Aquatics Centre used in the Beijing Olympics of 2008.

“The EFTE roof design is certainly one of the standout features of the school,” Demetrios notes. “It’s a perfect choice for large atriums and it allows ample natural light and significantly reduces the structural elements needed if a glass roof was used. The ETFE uses a ceramic fritt on the outer layer to reduce the solar heat load entering the building, ensuring the HVAC system is kept as efficient as possible and occupant comfort levels are maintained all year round.”

The atrium space of the school, in a similar way to Repton Abu Dhabi, provides the focal point for the development; the classes are stepped back as they move upwards to create an almost ampitheatre-style impression. 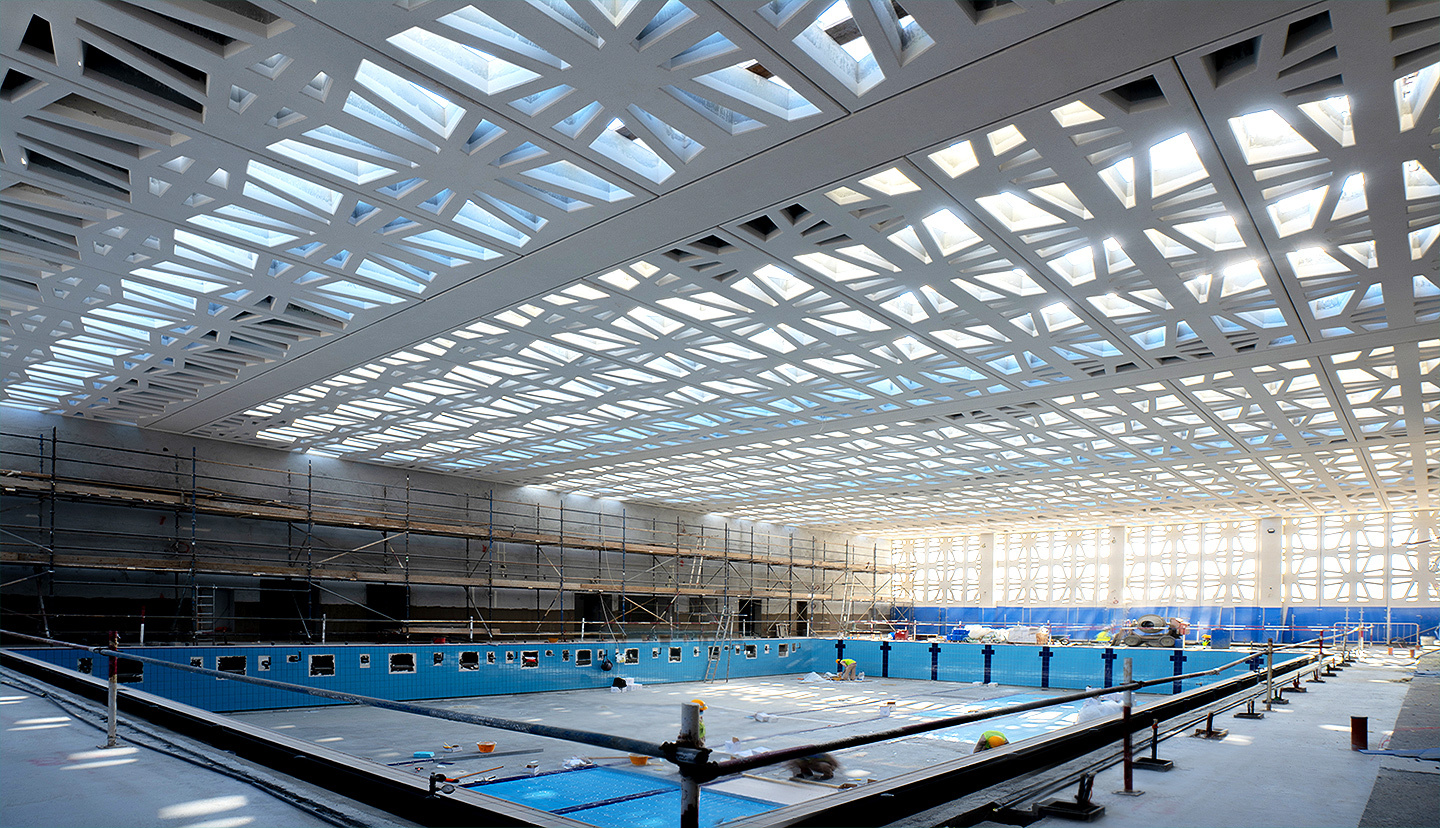 Another point of note is the outdoor swimming pool, which is covered by a unique precast concrete shading structure. “It creates a fantastic effect in the afternoon as the sun moves across and the shadows are cast through the space,” Demetrios says.

In addition to the standout elements of the design, the school also features multi-function sport courts, a football pitch, a large auditorium and a two-tier library, all contained within a GFA of 26,800 m2. “We’ve worked alongside Multiplex on multiple projects over a number of years, and with The Royal Grammar School Guildford Dubai we have another prime example of the benefits such a close working relationship between contractor and architect can reap for the client,” Demetrios says. “I’m sure under the stewardship of The Royal Grammar School Guildford, we have a product here that will provide the perfect platform for pupils to gain the knowledge and expertise to reach their full potential in life.”