The Edge, a BSBG-designed office building in Dubai Internet City, has won both categories for which it was nominated in the International Property Awards 2017. Picking up the top awards for Office Architecture (Dubai) and Office Development (Dubai), The Edge has proven to be one of the benchmark projects in Dubai for BSBG. The International Property Awards 2017 – MENA region ceremony is due to be held in September, and as winner of the Dubai categories, The Edge is now automatically in the running to pick up further awards in both the Arabia and International categories to be announced on the night.

In the meantime, here is an overview of the project, which became an award-winning development and one of our most popular buildings – instantly recognisable, and now recognised for architectural excellence – The Edge.

The Edge is a modern office tower situated in Dubai Internet City, designed and supervised by BSBG on behalf of developer Sweid & Sweid. 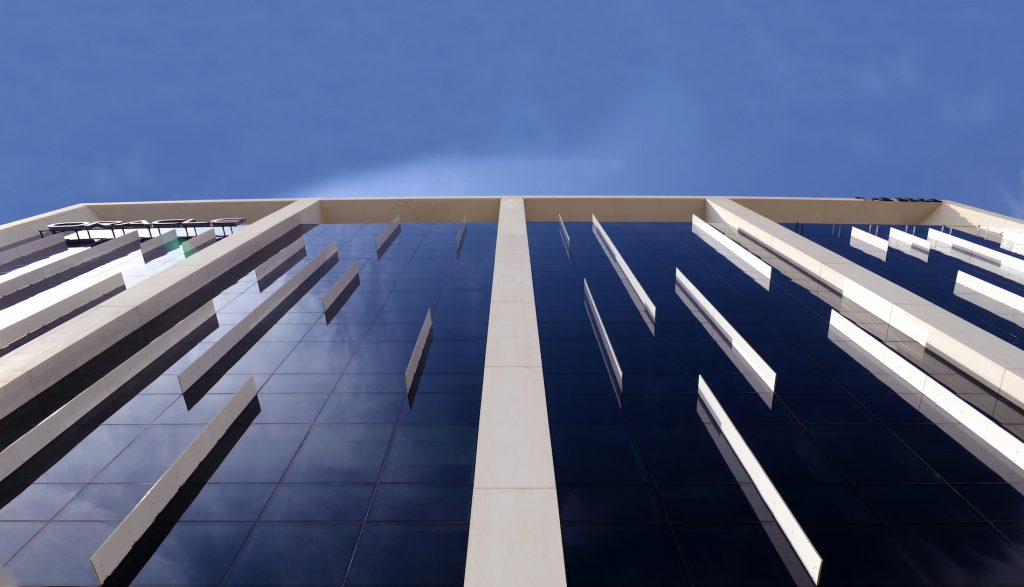 The design brief for The Edge called for a high-end, modern and distinguished office building with a unique aesthetical quality. A technically robust and flexible design in terms of office floor plate was required, capable of hosting smaller tenancies or large-scale organisations. The floor plate design was to deliver the option for both open plan or sub-divided office spaces according to the preference of the occupants. The Edge is now at 100% occupancy, just 10 months after completion. 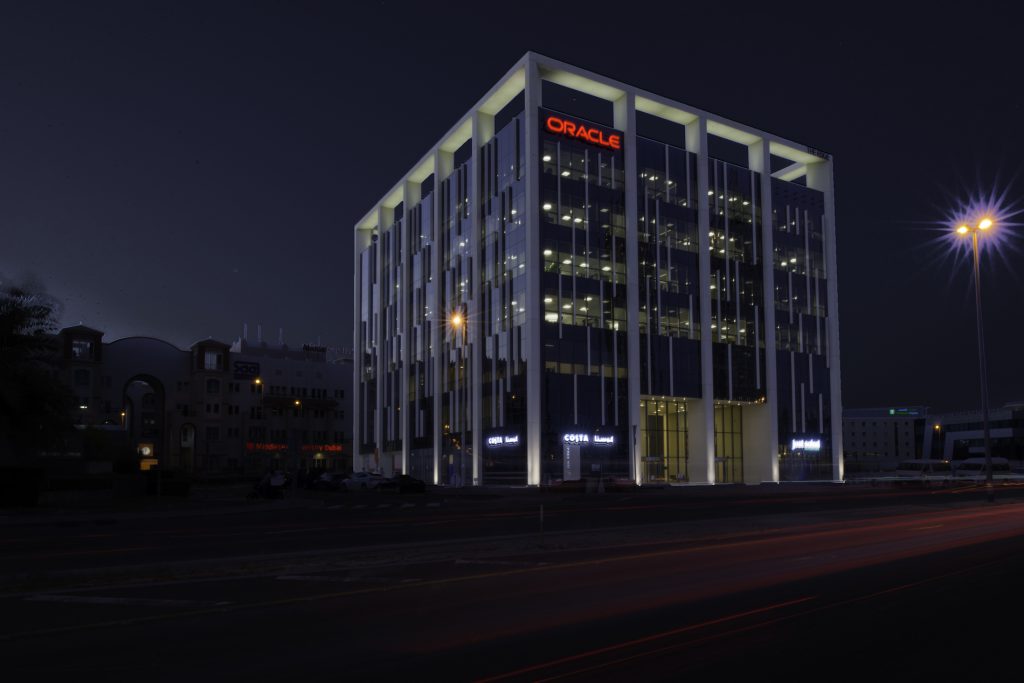 After initial planning was complete and the prescribed outcome was definitively inferred in terms of modulation and provision of office floor plates, the concept design of the façade evolved over a seven-step process.

The design was based on achieving the maximum GFA provision on the site, whereby the primary planning was established through engaging with the authorities on the structure and entry locations of the building. To achieve the full GFA provision, an efficient parking design was required which was further challenged by the irregular shape of the development plot. Close engagement with the authorities through all design stages was the only way in which this could be achieved.

Aesthetically, the design was moulded around the structural form of the building to maximise the GFA. The façade evolution amounted to an eventual re-planning of the building and the aesthetics of both the interiors and external design. 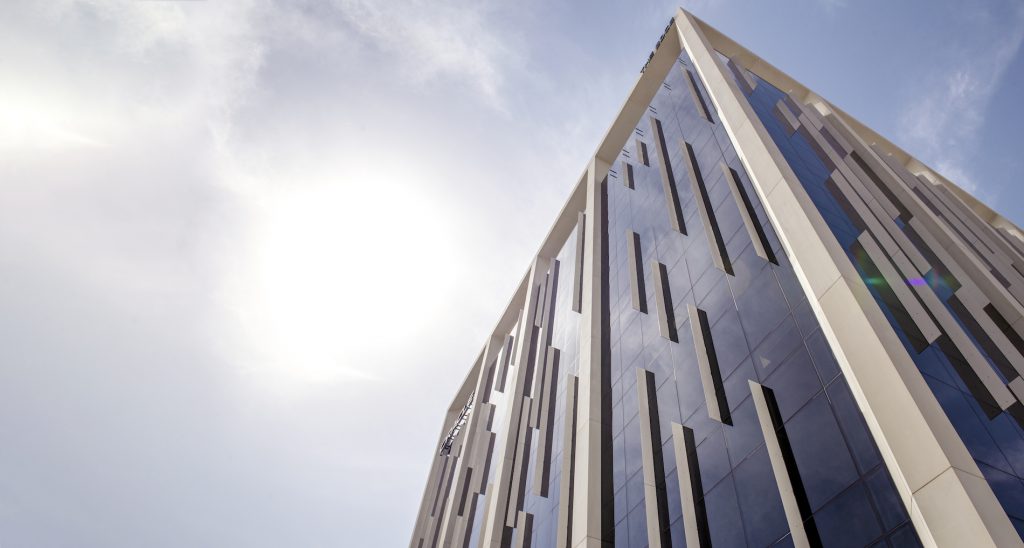 The building envelope is derived from a strong emphasis on the structural grid. The perimeter columns are architecturally expressed while the façade uses a glazed curtain walling system repetitious in module. The geometry of the building form results in a cubic appearance. Emphasis on vertical elements has been incorporated into the design of the façade to give the building more height and prominence.

A plan was formulated to try to emphasise the structure and engage it with the perimeter of the building and the façade system, so that the structural elements inside were also expressed externally.

The secondary consideration in this regard was to improve the efficiency of the floor plates, providing a larger-span open-plan environment on each floor, encouraging creativity and a collaborative working mechanism for occupants.

Multiple studies were conducted on the double height entrance to maintain the verticality of the building. The fenestration and the external fins were also the subject of in-depth exploration, during which time consideration was given to the appearance for occupants internally, and the need to forge a balance with the skin of the building from an environmental and aesthetic point of view. 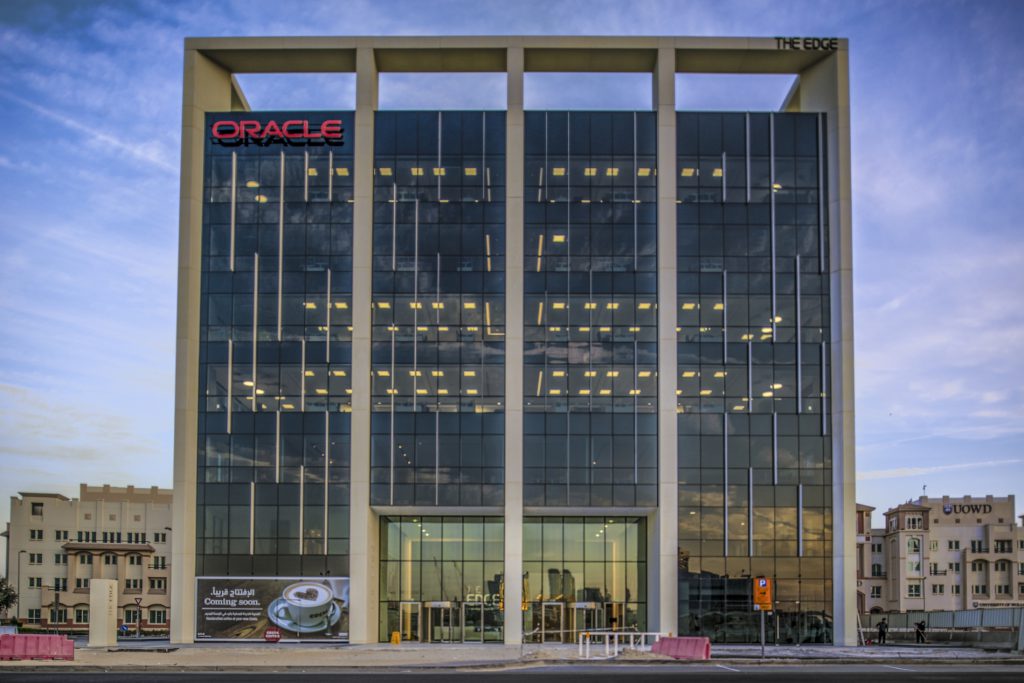 The final design conveys a cube-shaped building with distinct, clean lines accentuated by vertical fins protruding from the glass façade. The unique appearance of The Edge was conceptualised as a response to the existing urban dynamic of the area; the majority of the neighbouring developments take on a uniform feel, however The Edge was designed to create an identity all of its own.

Unlike the surrounding buildings, The Edge is clad in glass and Glass Reinforced Concrete (GRC), while the skin expression is balanced with in-floor sections of glass and internally-glazed sections to further reinforce the shell. The final positioning, frequency and size of the protruding fins on the façade was calculated precisely to maximise visual impact externally from different perspectives, while minimising the visual impact on occupant views.

The structural ribs and beams are expressed through the building, continuing at the top where a capping element was designed to give a proportional lid to the cube. This cap was sized appropriately to allow for the positioning of the building service components away from external viewpoints around the perimeter. The façade modulation is based upon a grid structure and is uniform, playing with symmetry for aesthetic purposes. 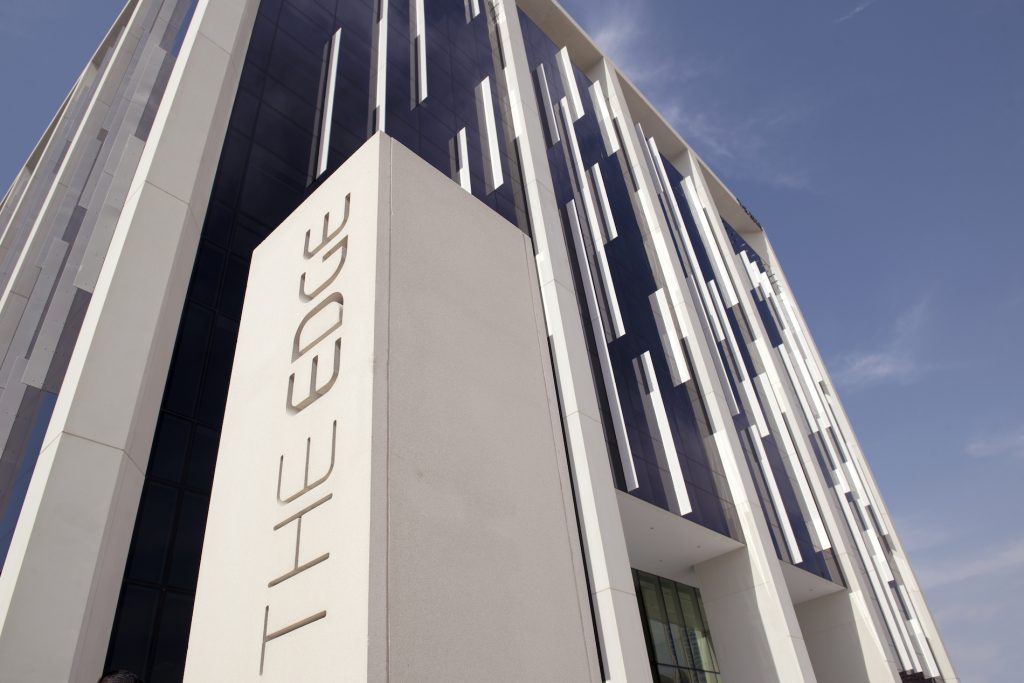 The interior design process worked through a minimalistic approach towards choice of surfaces and lighting schemes. Different areas of the building are reflected by a differentiation of surfaces and colour palette. The communal areas, in particular the lobby, are modest in size and so the illusion of space is created through retracting adjacent spaces and emphasising different areas through colour scheme. Darker colours adorn entry points, while the lobby in particular benefits from the use of whites, with clean surfaces and high ceilings giving an airy feel to the space. 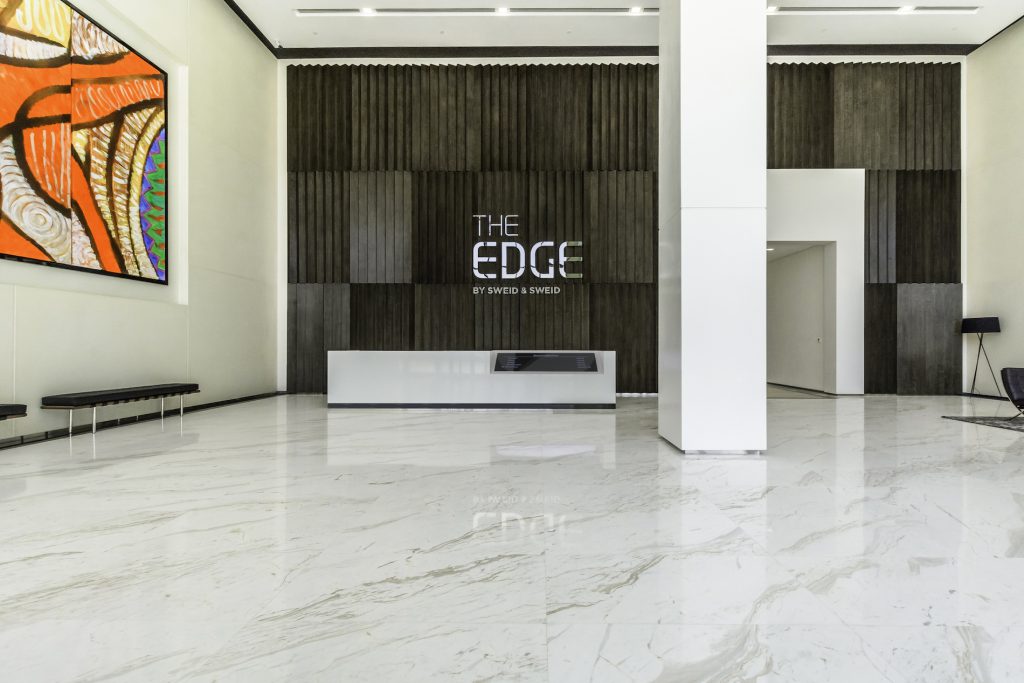 Through extensive study, different reflective surface materials were identified to meet the objective of moving light through the lobby to visually enhance the size of the space. The marble flooring of the reception area is mirrored externally by a pristine granite surface, creating a seamless transition as the end user enters/exits the building. This is mirrored too by the side wall of the lobby which penetrates through the glass to the plaza area frontage; the external part of the wall features ‘The Edge’ carved into the GRC, creating an unmistakable identity for the overall frontage.

In addition, the floor-to-ceiling glass used on the ground floor level surrounding the entrance is tinted to a lower degree than the glass used throughout the rest of the building. While the bulk of the building is covered in darker glass to give a contrast between the GRC and the fins, the lobby glass was chosen to allow plenty of light into the space during the daylight hours, and to let light emanate from the building in the evening – another standout feature for The Edge.

The wood components of the interior areas went through a multi-step process before in terms of preparation. The lace wood features indented grains, and, having sprayed the wood with bronze, sanded and varnished, so as the bronze appears only in the grain. 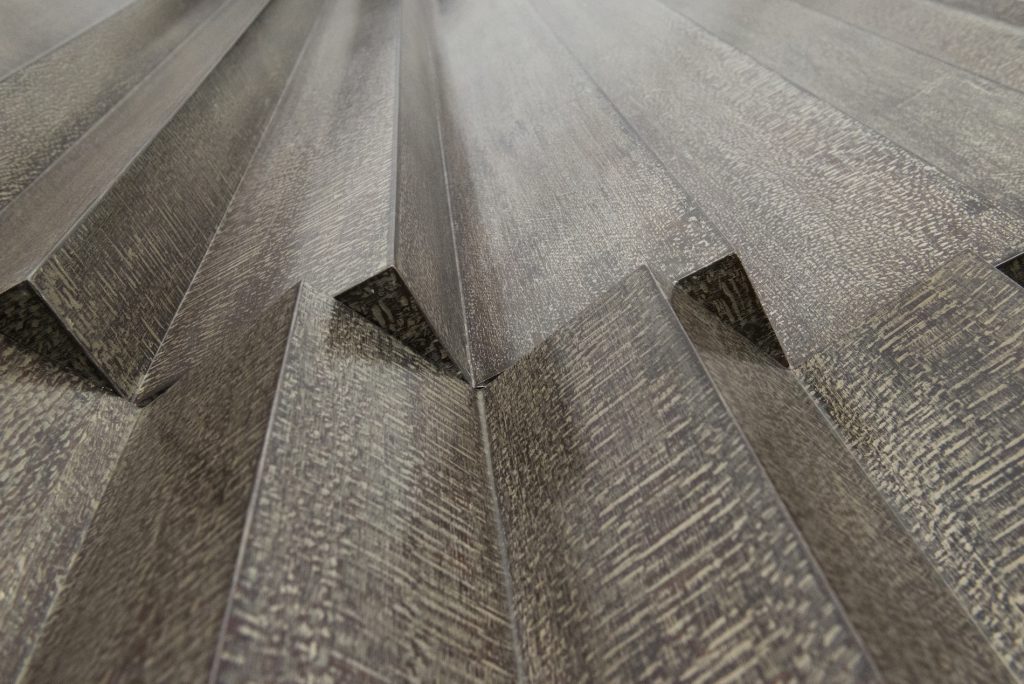 The Edge in summary

Stand-out presence within one of Dubai’s most sought-after business districts.

A highly-efficient offering that answers the requisite market demands of modern businesses.

Setting a new benchmark for developments in Dubai Internet City in terms of quality and efficiency.

+studio-designed Pavilion at The Beach officially opens to the public

Pavilion at The Beach, a day-night, all-year round dining concept, has now officially opened its doors to the…